Standard EN 407 'Protective gloves against thermal risks (heat and/or fire)' was published in 2004 and is still used today. It confers presumption of conformity to the essential requirements of Council Directive 89/686/EEC, which regulated the marketing of personal protective equipment (PPE) and was repealed by Regulation (EU) 2016/425 on 21 April 2018.

The differences between these two legislative acts are few. However, one difference in particular affects EN 407. Regulation (EU) 2016/425 specifically covers oven gloves, which are classified as Category II PPE (intermediate risk) and must bear the CE mark after being assessed by a notified body.

As EN 407:2004 does not provide for the assessment of oven gloves, the European Commission asked the European Committee for Standardization (CEN) to quickly revise the standard so that it would also cover household gloves that protect against thermal risks.

The 'glove' working group (known as CEN/TC 162/WG8) began work on revising EN 407 in 2017. Standardisation has considerably changed since 2004. Before, it was almost exclusively a European phenomenon (EN standards for gloves). Now, it is overwhelmingly international (ISO standards).

However, to save time, the working group immediately opted to limit the revision of EN 407 to the European market.
One year onward, the draft version of the revised EN 407 standard is ready to be put to a formal vote, which is the last stage prior to publication.

The entire standard has been revised, in particular to include new test methods published since 2004 as well as to implement practices currently used by notified bodies. It now covers the hands and arms and all industrial-grade and household gloves.

Care instructions (e.g., washing) are specifically taken into account. If they are provided, the relevant tests must be carried out before and after the gloves are cleaned as instructed. The assigned performance levels correspond to the lowest values obtained.

In terms of glove size, the only new requirement is on the minimum length of gloves worn to protect against splashes of molten metal.
To clear up any ambiguity in the previous standard, gloves with elevated performance levels (i.e., 3 or 4) must be easily removable in emergencies. Glove donning and removal times must be determined in accordance with EN 659:2008.

Gloves for protection against thermal risks

A new test setup system for the testing machine has been defined to prevent glove shrinkage when the ignition flame is applied. After the flame is applied for 10 seconds, the afterflame time and afterglow are the test results.

Three gloves must be tested. The lowest result (HTI24) gives the performance level (out of four possible levels).

The test method described in EN ISO 12127-1 is to be used.
The entire glove (palm, fingers, etc.) and all its component materials must be tested.

Three specimens must be tested. The lowest result gives the performance level (out of four possible levels).

The test method described in ISO 9151 is to be used.

Three 140 × 140 mm specimens taken from the palm of a glove must be tested. The lowest result gives the performance level (out of four possible levels). If a glove consists of multiple layers, a specimen consisting of all the layers must be tested.

Three 80 × 170 mm specimens taken from the back of a glove must be tested. The lowest result gives the performance level (out of four possible levels). If a glove consists of multiple layers, a specimen consisting of all the layers must be tested.

No changes have been made to this property. EN 348 continues to apply.

Three 260 × 100 mm specimens of material, including any seams where necessary, must be tested. The lowest result gives the performance level (out of four possible levels).

A key change is the creation of a new pictogram.

The previous pictogram (see 2) is still used but it has the serious drawback of consisting of a flame. New household gloves will primarily be resistant to contact heat but will not be non-flammable. A flame pictogram therefore cannot be used to warn the general public. Hence a new pictogram (see 3).

Other than this new pictogram, the marking methods for gloves that comply with EN 407 remain unchanged. 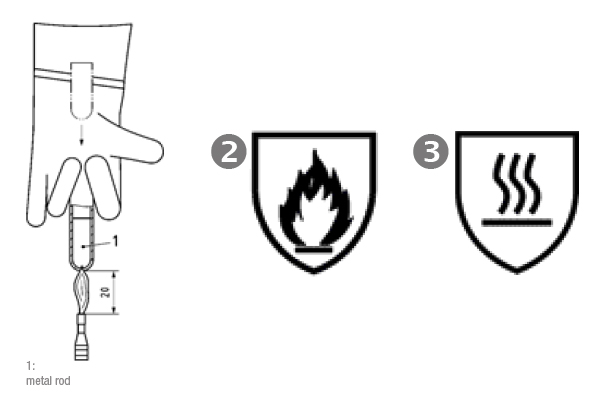 Information supplied by the gloves manufacturer

This section has been overhauled and supplemented. The aim of the standardisation group is to remove ambiguities, avoid user misunderstanding, and prevent misuse.

Work has been halted by the creation of the new pictogram, which must be officially registered before it may be used. This registration will take anywhere from 6 months to a year.

At the time of writing, formal voting should start between now and late 2018 and the new EN 407 standard is slated to be published in the first half of 2019.

On the same subject